Did you know it’s Women’s History Month? In the next instalment of our March-long celebration of women, Erin Martine Sessions catches up with Graphic Designer Louisa Nicole. And they have a lot of history! #womenshistorymonth #womensupportingwomen #iwd

E: Louisa, how did you come to be working at Brugel Creative? L: It was actually your wonderful networking suggestion that led to Sheree and me meeting and talking about how we can work together! As you know, I was fed up with working the 9-5 in a system that seemed to lock me out of the freedoms others with the same level of experience as I had, particularly men. I noticed discrepancies in treatment and attitude, especially about what I brought to the table, and the resulting income. I’d been told my whole childhood I could do what I wanted, I could be what I wanted to be, but it seemed to become evident that also meant I had to keep to someone’s else tune.

As a creative, that never seemed right. And at first, I put it down to that – that being a creative meant I was never going to fit but would have to try. But in my last “real” full-time job I had enough, I was reaching my late 20s and felt no better off than a fresh graduate. So, to the horror of my family and some friends, I took up being a freelance graphic designer. And when I met Sheree (our Brugel Creative Director), I discovered for the first time someone who understood me as a working creative woman.

E: Could you describe your role to me?

L: As a graphic designer, I help people visually communicate their message, and make it look as aesthetically pleasing as possible (where the brief calls for it.) I say no need for something to look boring and stale if it doesn’t have to!
And, if I ask you a question, I really want to know the answer. I don’t mean the clean clinical answer. I mean the whole thing, all of the ‘why?’. I want to really understand what you want to communicate, and I want to represent that in the best way I can visually.

E: I happen to know you’re incredibly talented, could you tell me about some of the other work you do (especially your art)?

L: I love to paint and draw, and currently I’m also working on a children’s book in my spare time. It’s about a snail who gets into a bit of mischief ¬– I’ll have to stop there until it’s completed. And then my friend Elizabeth Rogers (the author) and I can share it with the world! What I can say about it is that I’m loving the fact that one day I was telling her that I wanted to combine my graphic design skills with my first love of art and get into book illustration. Elizabeth gave me the story she was writing, and we’ve had some wonderful times collaborating. Refining both the story and how it’s visualised has produced some very amusing results along the way.

E: What are you passionate about?

L: Apart from expressing myself in artistic ways, it’s family and friends and how I’m connected to them and loving them. I’m pretty much a ‘quality time’ kind of person, so just being there for them to support and encourage them, especially in our shared faith in Christ gives me the biggest boost.

E: I love that! That is very much you! OK, now tell me something unusual about yourself?

L: I think I can be rather black and white about things, sometimes it keeps me out of trouble, and sometimes it gets in trouble! And just to be confusing, this contradicts my often loose-conceptual, and often abstract, way of thinking about the world. I’m more focused on the emotive and visual senses behind the idea rather than a solid idea itself…does that make sense?

E: I think that makes perfect sense for someone who communicates ideas visually! Can you tell me more about it?

E: I don’t think I’ve ever seen someone so grateful for emails! It sounds like women have been formative in your life. Can you tell me how you’ve supported other women?

L: I like to think that if the women in my life need a hand, they can call on me to show up and do whatever they need. Hearing them and empathising as best as I can, too, is something I feel is important. There’s a mutual gain when women share with one another: their thoughts, the hurt, the love, and even the weird. Trust no doubt plays a big part, though there’s something in the belonging to each other’s lives that happens in those times of sharing that’s beautifully enriching.

Sometimes I have been lost for words when empathising with someone, so I’ve found that to be an important moment to draw and to share that instead. In the process of drawing I’m dwelling on it, praying for it, and even learning from it and I hope those kinds of processes are passed on in the sharing of the drawing.

E: Louisa, you just perfectly described what you did for me when my dog – and my son’s best friend – Dug died.
Your drawing is still hanging on my wall.
You’re amazing in the way you have supported me and others. How have you been supported by women? L: I would say my answer to how I support women is influenced by what they’ve done for me. Being heard and, even further, being understood… and being challenged to grow in who I am (as opposed to what I’m expected to be) has made a big difference in where I am today… and even who I expected myself to be. There have been quite a number of women who have helped shape where I am today. They have helped me to know and understand that I have my own voice ¬– that I have something to say.

E: You’ve more than shown, even just in this interview, that you have observant, insightful, empathetic, and beautiful things to say. And we are better for hearing them. Thanks for taking the time to talk with me, and thank you for being someone has supported me and welcomed my support in return. 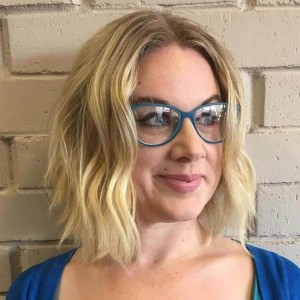 Erin is a communications specialist with over 10 years’ experience working in the Higher Education sector, where she has been a lecturer, writer, copywriter, and editor in a variety of contexts and genres. Erin is an academic, writer, speaker and poet, who presents at conferences and publishes nationally and internationally. Erin loves all things teaching, training, learning, researching, writing, etymology and word-nerdery. She’ll be managing Brugel’s communications and meeting all your copywriting and editing needs.